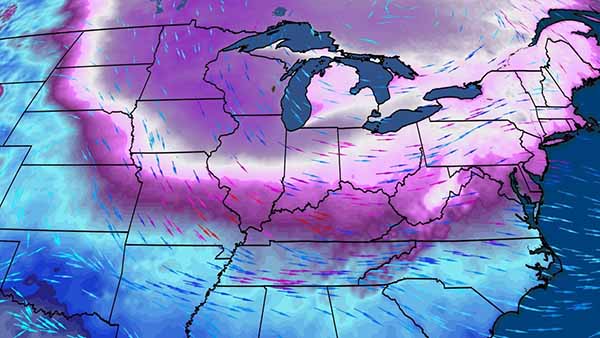 Extreme cold torturing much of the US, Minnesota may see wind chills of minus 70 degrees   CNN - January 29, 2019


There is some seriously dangerous weather heading across much of the continental United States ... and as the simulation cycles down you can expect more. Be careful when walking, driving, shoveling snow and everything else you do outdoors.


A polar vortex is an upper level low-pressure area lying near the Earth's poles. There are two polar vortices in the Earth's atmosphere, overlying the North and South Poles. Each polar vortex is a persistent, large-scale, low pressure zone that rotates counter-clockwise at the North Pole (called a cyclone), and clockwise at the South Pole, i.e. both polar vortices rotate eastward around the poles. The bases of the two polar vortices are located in the middle and upper troposphere and extend into the stratosphere. Beneath that lies a large mass of cold, dense arctic air. Read more


Science Says: Get used to polar vortex outbreaks   PhysOrg - January 29, 2019
It might seem counterintuitive, but the dreaded polar vortex is bringing its icy grip to parts of the U.S. thanks to a sudden blast of warm air in the Arctic. Get used to it. The polar vortex has been wandering more often in recent years. It all started with misplaced Moroccan heat. Last month, the normally super chilly air temperatures 20 miles above the North Pole rapidly rose by about 125 degrees (70 degrees Celsius), thanks to air flowing in from the south. It's called "sudden stratospheric warming." By Wednesday morning a polar vortex will be over the Lower 48 states for the first time in years creating record shatter temps.


A Vortex as you known can have different meanings in the fields of science and pseudoscience. A vortex can be found in physics, technology, gaming, roller coasters, fiction, music, and science-fiction. When traveling through a vortex, the version of you that results is not the same as the one that left. It's a different projection in the simulation.

A vortex spirals much like the movement of consciousness allowing energy to flow above and/or below from an access point.

If a vortex opened in front of you now what would you do?