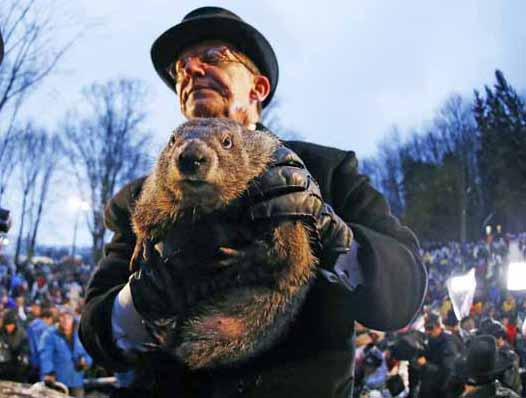 We spend a lot of time focused on, and predicting weather, because of the way it shapes our lives and moods. For now we follow local forecasts and the myth of Groundhog Day, as well as the frigid weather in Minneapolis (Super Bowl LII), and at the 2018 Winter Olympics in PyeongChang, South Korea.


Punxsutawney Phil ventured out of his burrow at sunrise in Gobbler's Knob in Punxsutawney, Pennsylvania and saw his shadow. According to legend that means there are six more weeks of winter. Lots of ceremonies going on there today - a time of fun not to be taken seriously by most. Groundhog Day in the News


Groundhog Day was originally known as Candlemas, which was the midpoint between the winter solstice and the spring equinox. It was celebrated in Europe, with Germans adopting a hedgehog to determine whether the rest of the winter would be bitter or mild. German settlers who came to Pennsylvania in the 18th century continued the tradition, substituting a groundhog.

According to the Punxsutawney Groundhog Club's website, Phil weighs about 20 pounds and is 22 inches long. The club also notes that there has been only one Phil (not true), crediting his longevity to drinking a secret 'groundhog punch' every summer at the Groundhog Picnic. The brew adds seven years to Phil's life every summer, according to legend. According to the Punxsutawney Groundhog Club, Phil has seen his shadow 103 times since 1887, and did not see his shadow 18 times. The other years have not been accounted for, the club said.

Other rodents that predict the weather on February 2nd

Staten Island Chuck in the NYC

Birmingham Bill from the Birmingham Zoo in Alabama

Wiarton Willie emerges in the community of Wiarton in Bruce County, Ontario