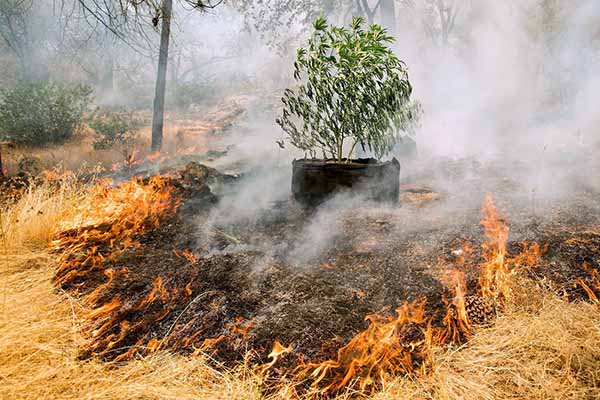 It looks like a war zone not at all the scenic state we are all familiar with. Wildfires of this kind can create many things from mudslides to earthquakes to poor air quality reminding me of the days we talked about LA smog.

As I sit here typing ... the image of one of my recent clients - who grows weed and runs a pot dispensary in northern California - came to mind. How would wildfires affect not only business but would the smell of weed permeate their area? [Ellie searching google] Pot Industry in California Hit by Wildfires - Rolling Stone

Wildfires are getting worse each year. .... One could say that about all Earth Changes as they accelerate exponentially in end times. Sadly insanity rages along with wildfires. All you can do is be prepared if that.


Email from my California Cousins ...

We are OK. The fires up north are 250 miles away, but in spite of the distance, the air here was very smokey with poor visibility. We were warned to stay indoors. The smog is clearing - I can now see the mountains about 2 miles away. - Dick in Los Altos

We are safe here but the air quality is really bad because of all of the smoke. These terrible wildfires are unfortunately becoming more common. - Ruth in the Bay Area

We are not affected. Some friends have evacuated from Malibu. We drove home from Pismo Beach on 2 of the freeways that closed a few hours later. Very windy at the time. Thanks for asking. - Mindy in LA

Fortunately not me. I do know some evacuated co-workers but don't know the state of their homes. - Nancy in Glendale

Not effected directly, but I'm in Santa Barbara this weekend for a music workshop. I couldn't drive directly because of road closures due to the fires. When I drove (405N - 118W - 23S-101N) last night after dark I could see fires in the hills, not many fires probably because of smoke. My house is not in danger. A musician friend, with whom I played a week ago today in her house on Malibu Canyon Blvd, is playing music as an evacuee. Rough times, getting worse. No strong winds today, but tomorrow is another story. - Doug from LA - professional cellist

Posted by Ellie Crystal at 8:12 AM