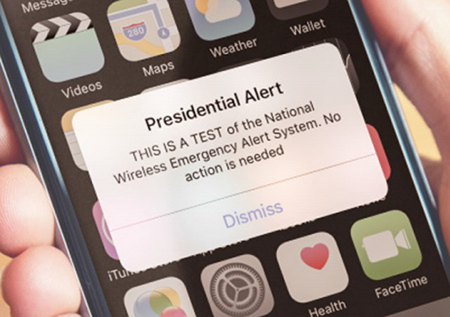 Feds send first emergency message test to cell phones   CNN - October 4, 2018
If you have a cell phone, it probably buzzed and beeped loudly Wednesday afternoon October 3, 2018 around 2:18 p.m. ET. "Presidential Alert," the screen said. "THIS IS A TEST of the National Wireless Emergency Alert System. No action is needed." It' was the first nationwide test of the system built by the federal government and cell phone carriers to warn Americans of an emergency, like a terror attack or a widespread disaster.

Did your cell phone go off? Mine did as I was talking to a friend in Florida. Her alert was about one minute behind mine. Some people got nothing. I also had a message on my TV. Many people are worried about this being a warning of things to come - be that an enemy attack or a natural disaster. One should always be prepared for anything in End Times.