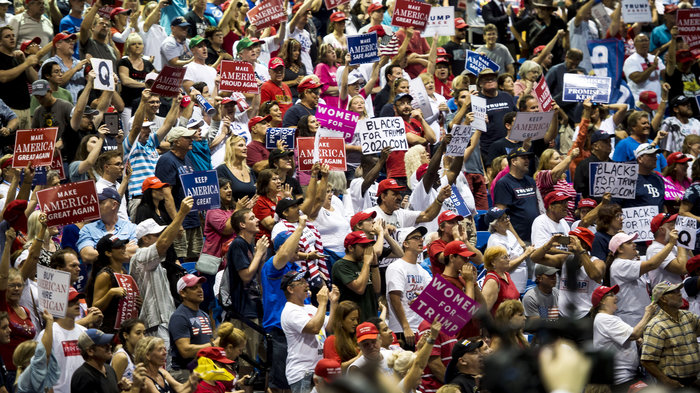 What is #QAnon? My friend Ron mentioned it several times this year but I never researched it because the energies were so bad. I mention them now because they surfaced at a Trump Rally on Monday as if by design. I don't waste time with conspiracies though our entire existence is based on conspiracies and lies which draw many people to them for whatever their reasons.

I don't plan to follow QAnon as it has the potential to create the foundation for something hostile and dangerous while attracting like-minded people in a world that is already insane, polarized and venomous. End times create strange world leaders and rebellions, which lead to anarchy. When I "look" at it, they don't appear to be the only group of this kind. These energies overlap with Nazi Germany before WWII. Stay away ...


Q is a fictional character as well as the name of a race in Star Trek appearing in the Next Generation, Deep Space Nine, and Voyager series, as well as in related media. The most familiar Q is portrayed by John de Lancie. He is an extra-dimensional being of unknown origin who possesses immeasurable power over normal human notions of time, space, the laws of physics, and reality itself, being capable of violating or altering them in unpredictable ways with a casual thought or hand gesture. Despite his vast knowledge and experience spanning untold eons (and much to the exasperation of the object(s) of his obsession), he is not above practical jokes for his own personal amusement, for a Machiavellian and manipulative purpose, or to prove a point. He is said to be nigh-omnipotent, and he is continually evasive regarding his true motivations. Read more


QAnon refers to a conspiracy theory centered on Q, an online handle used on several image boards by a presumably American pseudonymous individual or group of individuals claiming to have access to classified information involving the Trump administration and its opponents in the United States, and detailing a supposed secret counter-coup against the alleged "deep state". The conspiracy theory, mainly popularized by supporters of U.S. President Donald Trump under the names The Storm and The Great Awakening, has been widely characterized as a "baseless", "unhinged", and "deranged conspiracy cult". Read more


What Is QAnon? The Conspiracy Theory Tiptoeing Into Trump World   NPR - August 2, 2018


'We are Q': A deranged conspiracy cult leaps from the Internet to the crowd at Trump's MAGA tour   Washington Post - August 2, 2018


What Is QAnon: Explaining the Internet Conspiracy Theory That Showed Up at a Trump Rally   New York Times - August 1, 2018