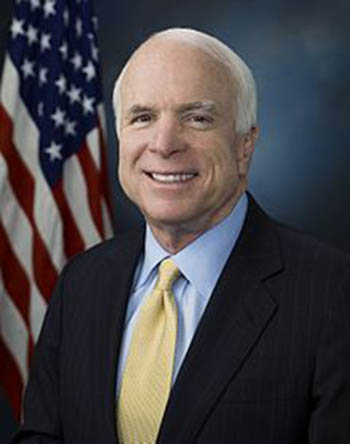 Whenever America was in a fight during his long lifetime, John McCain was in the thick of it. McCain, who has died at the age of 81, was a naval bomber pilot, prisoner of war, conservative maverick, giant of the Senate, twice-defeated presidential candidate and an abrasive American hero with a twinkle in his eye. Read more ...

Tributes from former US presidents and across the political spectrum have poured in. Barack Obama, who beat Mr McCain to the White House in 2008, said they shared a "fidelity to something higher". George W Bush described him as "a patriot of the highest order".

President Donald Trump, whom Mr McCain had strongly criticized, tweeted his "deepest sympathies" to McCain's family but did not comment on his life.

Sources quoted by US media said Trump would not be invited to the funeral and the current administration would probably be represented by Vice President Mike Pence. Former Presidents Obama and George W Bush are expected to give eulogies.