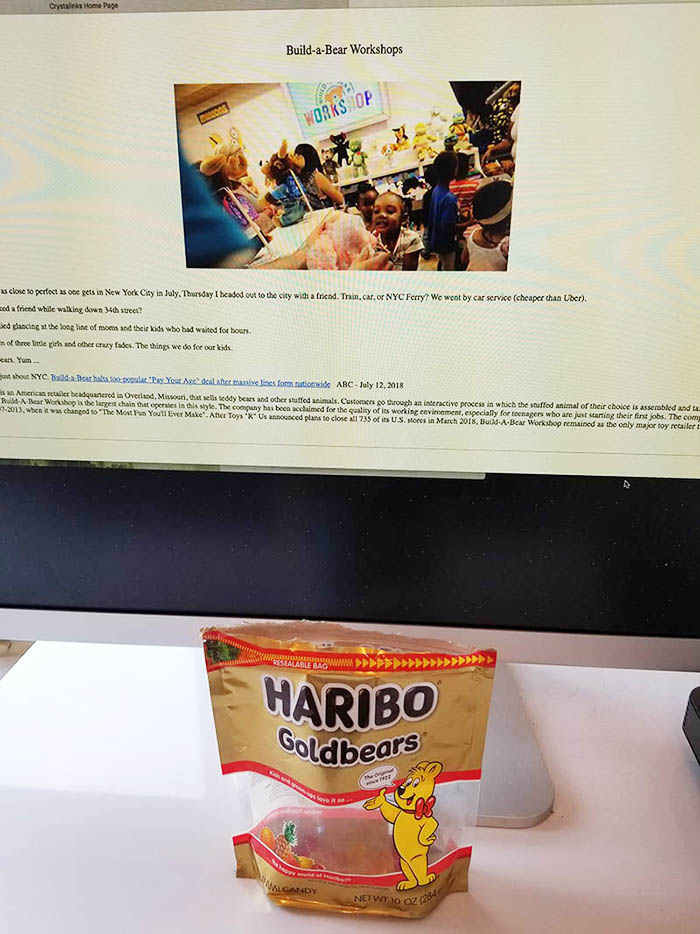 As the weather remains perfect, or as close to perfect as one gets in New York City in July, Thursday I headed out to the city with a friend. Train, car, or NYC Ferry? We went by car service (cheaper than Uber).

"What's the long line about?" I asked while walking down 34th Street.

"A Build-a-Bear Workshop", she replied glancing at the long line of moms and their kids who had waited for hours.

It took me back to being the mom of three little girls and other crazy fades.

My favorite bears are gummy bears.Yum.

Here's the link as this was not just about NYC. Build-a-Bear halts too-popular "Pay Your Age" deal after massive lines form nationwide   ABC - July 12, 2018

Build-A-Bear Workshop Inc. is an American retailer headquartered in Overland, Missouri, that sells teddy bears and other stuffed animals. Customers go through an interactive process in which the stuffed animal of their choice is assembled and tailored to their own preferences during their visit to the store. Build-A-Bear Workshop is the largest chain that operates in this style.

The company has been acclaimed for the quality of its working environment, especially for teenagers who are just starting their first jobs. The company's slogan was "Where Best Friends Are Made" from 1997-2013, when it was changed to "The Most Fun You'll Ever Make". After Toys "R" Us announced plans to close all 735 of its U.S. stores in March 2018, Build-A-Bear Workshop remained as the only major toy retailer to survive the retail apocalypse.