The Flying Dutchman and the Wandering Jew 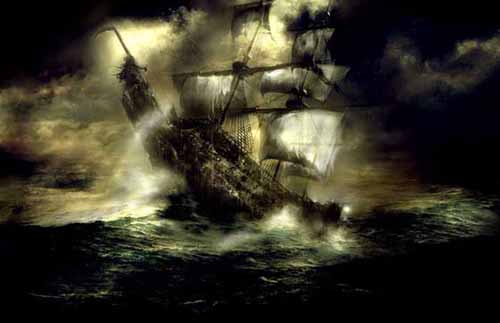 On this date in 1881 - George, Prince of Wales (later King George V), as a 16-year-old naval cadet on the HMS Inconstant off the Australian coast, wrote in his log book: At 4:00 AM the Flying Dutchman crossed our bows, a strange red light as of a phantom ship aglow. Thirteen persons altogether saw her, but whether it was van Dam of the 'Flying Dutchman', or something else, remains unknown.


According to folklore, the Flying Dutchman is a ghost ship that can never go home, but must sail "the seven seas" forever. It is usually spotted from afar, sometimes glowing with ghostly light. If she is hailed by another ship, her crew will often try to send messages to land, to people long since dead. Versions of the story are numerous. Some have noted the resemblance of the Flying Dutchman legend to the Christian folk tale of the Wandering Jew who wonders the Earth until the Second Coming.